St George “in between balls” with Anthony McQuire I started my junior cricket in Wollongong for Keira and then into seniors with Wollongong University when I played. I played Green Shield with St. George and when I moved from Wollongong at 18 years old I played for 6 years at Wests then moved to St. George for two years. I moved to Canberra for three years to play with the Comets and then when they were kicked out of the domestic one-day cricket I moved to Melbourne to play with Prahran and Richmond.

I then moved into club coaching as batting coach and head coach at Camberwell Magpies when I finished playing and I’m now the High-Performance Coach at Melbourne University Cricket Club.

Over the last 4-5 years I have competed in triathlons and open water swimming. Since my youngest son Charlie has taken to golf I am starting to play more golf again as well.

I have completed the Western Sydney Half Ironman, competed in a team’s half ironman with the great men Richie Phillips and Matt Whitby, and finished 4 x 5 km ocean water swim races.

Rudy is my favourite as it’s based on a true story and is great tale of determination and persistence when people tell you can’t do something and you prove them wrong.

Moneyball for similar reasons to Rudy. I have also started watching the “All or Nothing” series on Amazon Prime and the Test and I love those as they give great insight into how different professional sports teams function under pressure and develop and maintain their culture.

List A Domestic One Day games for the Canberra Comets, PM XI against the West Indies, NSW and Victoria 2nd X1, Australian Country XI against Sri Lanka and Zimbabwe, Australian Under 19s and 17s, 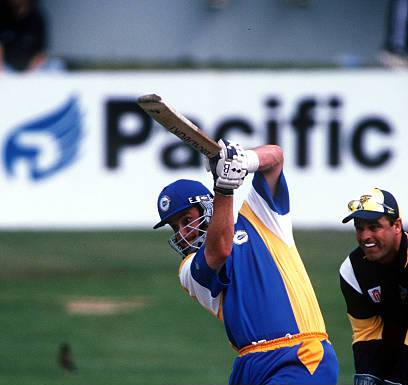 I think it was 77 in the Grand Final against Mosman.

The less I bowl the better haha

Don’t think I bowled for St George, but if I did it would have been one over of rubbish.

Who was the scariest bowler you have played againstr?

Ken McLeod bowled me the quickest and scariest spell I have ever faced at Manuka Oval when I was playing for the Cricket Academy against the ACT. The big Left handed West Indian quick bowled five overs of lightning speed and not one ball in my half of the wicket.

Brett Lee in the grand final against Mosman was also rapid and pretty angry.

Shane Warne by a country mile, and Tommy Shiner.

Darren Lehmann in a Comets game at Manuka Oval, he was amazing in his ability to hit the ball where he wanted it and just took the piss, Adam Gilchrist – complete genius.

Hands down Jeremy Bray, loved opening the batting with him, being in the dressing room with him and getting out on the circuit – legend.

Viv Richards – still love watching him bat and still think he is the best batsman I have seen. Geoff Marsh – when I was a kid and opening the batting I love his gutsy way he went about opening the batting. Mark Waugh – love to watch him bat, made batting look easy.

Jeremy Bray – it was a pleasure to stand at the other end when he took down the Mosman attack in of Brett Lee, Shane Lee, Phil Alley and Craig Hughes along with all the other innings I was grateful to watch from the other end. Aggression skill and he backed himself no matter what the situation.

James Turner – worked his arse off for the whole of his career and was one of the most competitive people I know.

Chad Porter – loved playing with him and his competitiveness and willingness to get into a scrap on the field.

Playing and training with mates, the team environment and dressing room, being in competitive situations, facing fast bowling.

The history of the club, batting on Hurstville Oval and playing with a great bunch of blokes across all five grades

Top scoring in the Prime Ministers X1 against the West Indies in a winning team. Scoring a hundred in a Grand Final for Weston Creek in Canberra to help win their first First Grade Premiership for the Club.

For St George there were two – Winning the Grand Final against a strong Mosman team, and filling in as Captain against North Sydney with a young side (due to injuries and State representative commitments) at Hurstville Oval and winning in a game we were not supposed to win.

They were 9 down needing about 10 to win with Warwick Adlam in and Jimmy Turner cleaned him up to win the game.

The team song and the winning culture embedded at the club.

For St George there were two – the Grand Final against Mosman and the game against North Sydney set out above.

The grand final for Weston Creek was pretty special as well as it was the first time the club had won a premiership and to score a hundred to help us win the game was awesome.

Playing golf with my son Charlie, boxing and fitness training.

What happens to you is not the important thing, it’s how you respond that matters.

I am a lawyer, cricket coach at Melbourne University Cricket Club and personal trainer.

My two children – Mitchell and Charlie

Enjoy the game and have fun. Take the time to know your game and learn how to adapt when you are out of your comfort zone. There is no substitute for working hard and continuing to learn and improve your game.